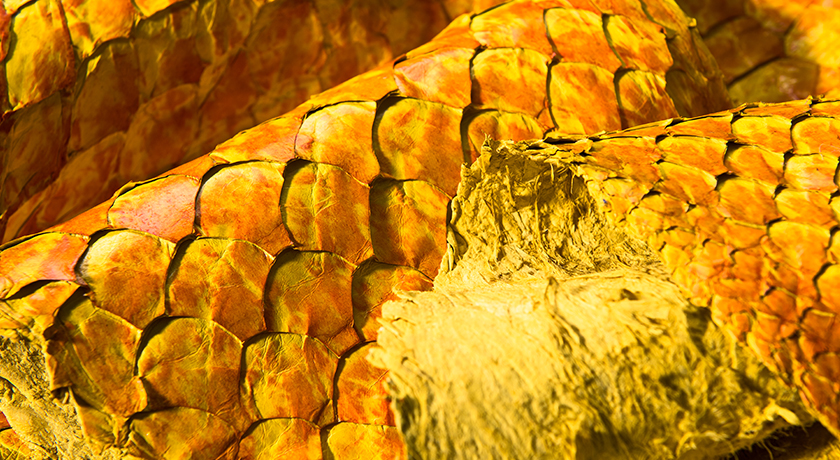 As an animal that can weigh up to 200 kilos, its meat is enjoyed by many and its skin catches the interest of world-class designer labels.

It may seem like an ox, but it’s a pirarucu.  The “giant of the Amazon” has historically been sought after for its soft, flavorful meat.  Threatened by extinction, the fish is a favorite of aquaculturalists: it grows quickly and in high density, producing fillets of almost 60% its total body weight.

Traditionally pirarucu is cooked over coals- which wastes its skin.  Little by little however, the skin has been discovered by designers and labels that use it to make shoes, bags, and furniture.

Pirarucu skin has a good reputation.  It’s different than that of bovines: having interlaced fibers, it can hold more tension.  But it also has some onerous peculiarities. “You need to know how to work the fish, since its size makes it more difficult than bovine skin.  Many pieces must be hand-sewn”, explains forest engineer Rose Dias.

These difficulties didn’t prevent Givenchy from releasing the first pirarucu handbags made by an international brand though.  Their price can reach upwards of $4,500.

Pirarucu leather is an Amazon and Brazilian trump card.  It imprints a piece of the country’s identity wherever it’s used, while simultaneously warning of the necessity of caring for Brazil’s natural wealth.

Designer and stylist Ronaldo Fraga has used the skin in furniture and shoes.  In recent editions of São Paulo Fashion Week (SPFW) it was part of some of Oskar Metsavaht’s pieces – the name behind the world-renowned Rio brand Osklen.

Metsavath formed a partnership with the Nova Kaeru tannery, which specializes in exotic leathers, for a line in which this Amazonian fish is the star.  All aspects of production are fiscalized by Intituto-E, which promotes sustainability in the fashion world.

Rose Dias and her husband, engineer Aidson Ponciano, were pioneers in pirarucu’s use.  In 2000, they founded Green Obsession with the objective of making its chain of consumption more sustainable.

The skin represents nearly 10% of a pirarucu’s weight.  Like the skin, the fish’s bones, scales, and innards have a guaranteed final use, from industry to artisan, completing a sustainable cycle that begins in accredited hatcheries.  Green Obsession recruits and trains workers from poorer regions of Manaus to work the leather.  “They’re exclusive pieces- ecologically correct and very special, as they’re from the Amazon, one of the richest and most magical places on earth” affirms Aidson.