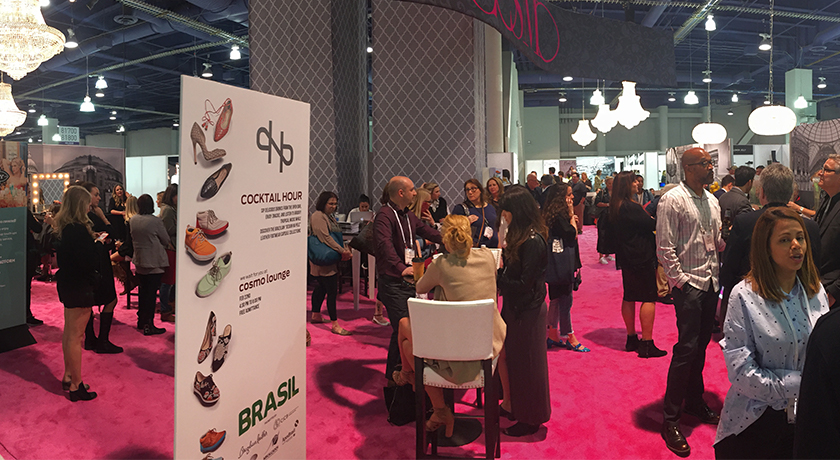 The second day at FN PLATFORM, North-American exhibition that took place between February 21st and 23rd in Las Vegas, served as stage for the launching of the capsule collections developed for project Design na Pele. DNP is part of Brazilian Leather, project dedicated to promote leather exports and coordinated by the Centre for the Brazilian Tanning Industry (CICB) in partnership with the Brazilian Trade and Investment Promotion Agency (Apex-Brasil). The project’s participation at FN Platform also had support from the Brazilian Footwear Industry Association (Abicalçados)

During the opening cocktail, buyers from all over the world were able to have a close look at the collections and talk with Design na Pele representatives, therefore learning in detail about the project’s creative process. Products developed for DNP also caught the eyes of the North-American press, who attended the event in great number.

The other 32 Brazilian brands that took part in FN Platform also capitalized on the buzz promoted by Design na Pele. “The collections are pretty unique, with a strong Brazilian inspiration. That alone took buyers to pay extra attention to other Brazilian exhibitors, who benefit from the made in Brazil”, highlights Roberta Ramos, project manager at Abicalçados. The Brazilian participation at FN Platform takes place through Brazilian Footwear, project dedicated to promote Brazilian exports and coordinated by Abicalçados in partnership with Apex-Brasil.

In its third edition, Design na Pele was conceived with the objective of promoting leather for the development of unique footwear articles. Through DNP, unprecedented partnerships were consolidated between celebrated designers – Patrícia Viera and Ronaldo Fraga – and Brazilian footwear brands Guilhermina and Kildare for the creation of two capsule collections. The products were created around leather articles specially developed by Brazilian tanneries Bom Retiro, Moderno and Rusan, and will soon hit local and international stores. Celebrated as one of the world’s most innovative projects within the international leather industry, Design na Pele has once again promoted the combination of design, creativity and Brazilian industrial excellence.